Radon is an odorless, invisible, tasteless, and harmful gas that contributes to the deaths of over 20,000 Americans each year. In addition to radon being virtually undetectable, it is the second leading cause of lung cancer in America, according to the Surgeon General’s National Health Advisory. Approximately 7 million homeowners across the United States have high levels of radon gas in their residences, negatively affecting the health of all their inhabitants. At AdvantaClean, we understand just how widespread and dangerous this gas is and we want to help and your family avoid the effects of radon poisoning.

Contact us online or feel free to call us today at (877) 800-2382 to learn more about radon and speak with one of our experienced radon specialists.

How Radon Affects its Victims

Radon is a gas that occurs naturally in nature when uranium decays over time. This natural decay occurs in nearly all rocks and soil and it produces radon in gas form. The radon gas then rises up from the ground and into unsuspecting homeowners’ residences. It can infiltrate homes in any number of ways, including through wires, cracks in the floors, pipes and pumps, cracks in the wall or foundation, and even surface water. Once the gas is in the home, it builds up over time and is ingested by the residence’s inhabitants. Radon gas most commonly poisons its victims through inhalation, but it can also be consumed via radon-infused water.

What To Do if You Experience Symptoms

The way that radon gas harms its victims is by its break down of radioactive particles over time. Once you breathe in radon and it gets into your lungs, its particles continue to degenerate, thereby emitting tiny bursts of energy in your lungs. These energy bursts add up over time and are extremely harmful to your lung tissue. This is how radon causes lung cancer and this is why it is imperative that you get your home professionally tested for radon gas if you or your family has experienced any of the symptoms above.

Radon poisoning symptoms are often mistaken for symptoms of other, less severe causes, such as the common cold or a respiratory infection. Unfortunately, tens of thousands of Americans die every year from the preventable and harmful effects of radon gas, often because they thought that it would never happen to them. 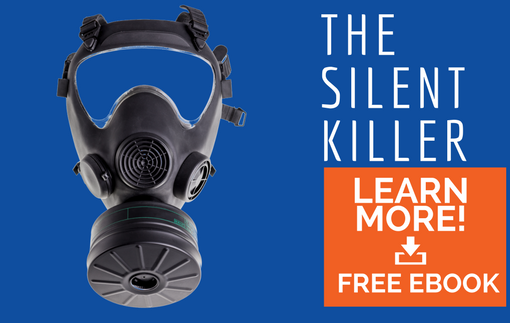 How AdvantaClean Can Help You

Our radon specialists at AdvantaClean can quickly and proficiently test your house for significant levels of radon gas. If we find nothing, then you and your family can sleep soundly at night knowing that you are safe and secure from the deadly effects of radon poisoning. If we find that there are unsafe levels of radon gas, we can get to work immediately to remove it and make your house safe again.

Call us today at (877) 800-2382 to request our services and speak with one of our experienced radon specialists.